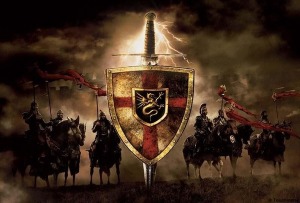 I diverge from my thoughts on community, with thoughts on the warrior in some of us. My friend, Bonny, from MN, had a post about the warrior in her daughter. She asks the question, are fierce warrior types ever aware of their presence or status?

As one who is beginning to see|recognize|give life to the warrior in myself, I left the follow thoughts.

I think we become into a deeper realization of the warrior in us. When we begin to realize that this is us, new meaning seeps into our life, sometimes floods. I think though that the challenge of the warrior is to hone and develop the character to “war” and “battle” in constructive ways. We are not necessarily recognized by those around us… until we find those who speak our language and can go to battle with us.

The warrior… some of us have it in us. It makes us fight, tooth, claw, and nail, for the things we love. It gives our lives an epic feel… a sense that there is a deeper purpose to our lives, and if we do not pursue that we are less than the men and women we are made to be. We go into our lives with our heads held high and our mission before us. And at the end of the day… the question we ask ourselves is not, “Did I have fun?” but “Did I do what I was supposed to do?”

It’s strange for me to claim the warrior in myself, being one who is apposed to violence, war, and anger. And yet, in the midst of my very contemplative personality, I can say that still there is a strong warrior inside. I have begun to identify more and more this character inside me as I have delved more deeply into the Celtic story. Thanks to Stephen Lawhead for the many ongoing years of foundation.

I realize that we are indeed called to battle of a kind. We are reminded by Paul that “our struggle is not against flesh and blood, but against the rulers, against the authorities, against the powers of this dark world and against the spiritual forces of evil in the heavenly realms.” We ARE called to battle… but as Greg Boyd puts it so well, when we bring the battle to other humans, we are fighting the wrong enemy. I do not see that fighting hate with hate, death with death, fear with fear, is the way of the true warrior. To love is to drive out fear. It is this I battle for.

And for the daily need for battle and hunger for victory… well, there is always a competition to be had. For me, it’s the tennis, the board games, the mountain biking, the log splitting, the ranch work, and the study. Victory, even defeat, when found in constructive ways, has never felt so good.